Because of you – more politicians are responding with detailed gamba plans.

Yesterday, the Territory Alliance announced their policy for dealing with gamba grass ahead of this year’s Northern Territory election.

It is great to see more policies for gamba being announced, especially when they focus on funding communities to implement their own local gamba plans.

Of particular note is the Territory Alliance’s commitment of $20 million over four years to fund this fight.

Putting significant funding on the table is critical to an effective response to gamba grass. Experts and the community have been calling for a significant increase in funding for years.

Will you write to all political parties in the Territory to ask for their gamba plans?

Community members have been calling out for increased funding for years to help them get the job done – today’s announcement shows that this message is being heard.

We’ll all see politicians on the pavements, at the markets or at various events over the coming weeks, and it’s on all of us to acknowledge steps that have been taken and get details from all parties on their plans to deal with gamba.

Write to them today and show that you want all politicians to step up by tackling the gamba crisis properly: https://gambagrassroots.org.au/sign

Thanks for everything that you do.

See where the parties stand on Gamba action this election

The federal parties promises to tackle Gamba Thanks to the... 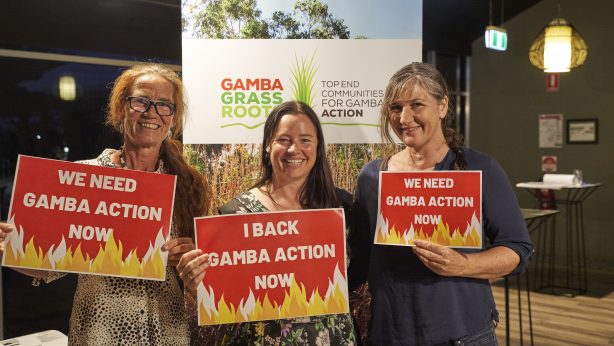