Territory residents and leading invasive species experts have described Federal Labor’s commitment today to a package of $9.8 million in funding for jobs tackling gamba grass as a potential game changer in the fight to prevent the spread of one of the greatest threats facing iconic landscapes, native plants and animals in the Northern Territory.

The Invasive Species Council and Gamba Grass Roots have been calling on all federal parties to commit to significantly more gamba control in the Top End to stop the invasive weed species spreading further across the Northern Territory and into the Kimberley or Far-North Queensland.

“Gamba grass is the worst of the worst when it comes to invasive weeds in Northern Australia.  It can grow up to four metres high and fuels hotter, more intense fires which are transforming the Top End by reducing tree cover, changing water availability, depleting nutrients and increasing greenhouse gas emissions, ” Invasive Species Council CEO Andrew Cox said.

“This funding commitment from Labor has the potential to be a real game changer in tackling gamba in the NT, ensuring enough resources and boots on the ground to start to see the year-on-year reduction in Gamba’s spread.”

“We are now calling on all sides of federal politics to match Labor’s exciting commitment to $9.8 million in funding over four years, which includes the creation of an additional 30 jobs to support the successful Northern Territory’s ‘Gamba Army’, ” said Mr Cox.

“Those of us who deal with the impacts of gamba on our properties have been calling for more government support for years, so it’s great to see it finally getting the federal attention it deserves,” said Geoff Martin, a local resident in Palmerston.

“The Gamba Army has made some headway into tackling gamba, but it’s important that we properly resource all efforts to eradicate it once and for all.”

“Millions of hectares of northern Australia, including the Kimberley and Far-North Queensland, are at risk from this weed if we don’t act now to contain its spread,” said Dave Liddle, Environment Centre NT and member of the Northern Territory Gamba Grass Weed Advisory Committee.

“This funding will keep more Territorians in work, reduce the risk of fires to homes, while protecting the Northern Territory’s globally significant northern savanna and places like Kakadu National Park.

“It is also a welcome recognition that the federal government has a role to play in providing ongoing funding and support to supplement the important efforts of the Northern Territory Government in stopping the spread of gamba. The onus is now on all federal parties to match this important funding commitment from Labor,” said Mr Liddle.

The Invasive Species Council works nationally to secure stronger laws, policies and programs to keep Australian biodiversity safe from weeds, feral animals and other invaders, and has long been concerned about the threat gamba poses across northern Australia. Gamba Grass Roots is a campaign to raise awareness of the threat posed by gamba grass to homes and communities, tourism and the unique Top End landscape and wildlife. The Environment Centre NT (ECNT) is the peak community sector environment organisation in the Northern Territory. All of these organisations operate in non-partisan ways and do not endorse or support any political party or candidate, but will offer commentary on policy announcements relevant to their fields of work. 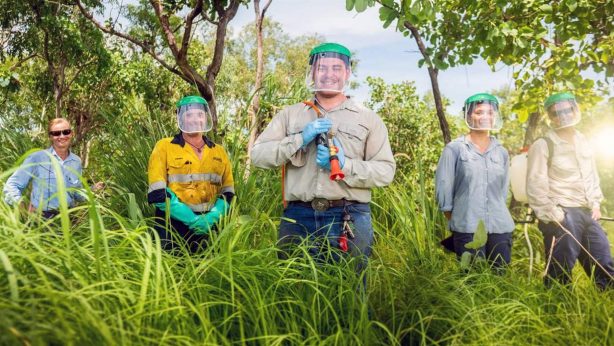