Following the release of the NT Government’s first annual report of the Weed Management Plan: Gamba Grass 2020-2030, the Gamba Grass Roots alliance has welcomed good progress on multiple fronts, but says there is more work that needs to be done to protect the Territory environment from this highly destructive weed.

The report tracks progress over six months from December 2020 to June 2021 on the goals and objectives laid out in the plan, which was created by the Weed Management Branch and Gamba Grass Weed Advisory Committee to mitigate the damage caused by gamba grass to the natural environment, property, infrastructure and public health.

“It’s great to see the Government doing more to communicate with the community on how their plan to tackle the gamba crisis has fared over the first six months,” said Mitch Hart, NT Manager for the Pew Charitable Trusts, who is a member of the Gamba Grass Roots alliance.

“The report highlights positive early progress on the implementation of the plan, building on the hard work of landholders, Aboriginal Rangers, agency staff and researchers.”

“Ultimately, the success of the plan will depend on its ability to drive long-term reductions in the extent of gamba infestation. Researchers and agency staff have now established a clear baseline for measuring progress, but we know that increased resources and action will be needed to get gamba under control.”

“These reports are key to ensuring the public can see that the plan remains on track and is successful. Future releases need to provide a comparison with previous reporting periods so the community knows how efforts are progressing year on year.”

“This is our starting position – and it is certainly a good one – now, we need to be seeing a reduction in Gamba each and every year,” Mr Hart said.

Rural residents also welcomed the report. “Gamba has a devastating impact on our environment, fuelling fires which pose a threat to our businesses, homes and families,” Humpty Doo resident Pauline Cass said.

“This first annual report gives me hope that the majority of rural residents are doing the right thing and removing the gamba from their properties.

“It’s great to see the efforts made by the Gamba Army, who sprayed 760 hectares of gamba over the six months, but increased resources are the only way we can get rid of more gamba on Crown Lands and in our parks like Litchfield.”

The first report on the Weed Management Plan: Gamba Grass 2020-2030 is available here. 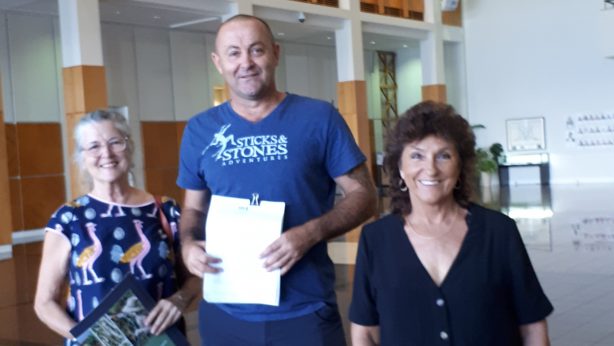 Tourism operators are calling on the NT Government to tackle...

More than half of all Gamba records occur within Daly...

Gamba Stories
SearchPostsLogin
Tourism operators call on NT Government to act to protect Litchfield Park from gamba grass
New Gamba report shows progress, but more still to be done
It’s time to start thinking about gamba control
Getting off on the right foot with the 10 year gamba plan
Action on Gamba Grass a major issue for residents in Daly by-election
Where do your local council candidates stand on Gamba?