It's time to grow the Gamba Army. 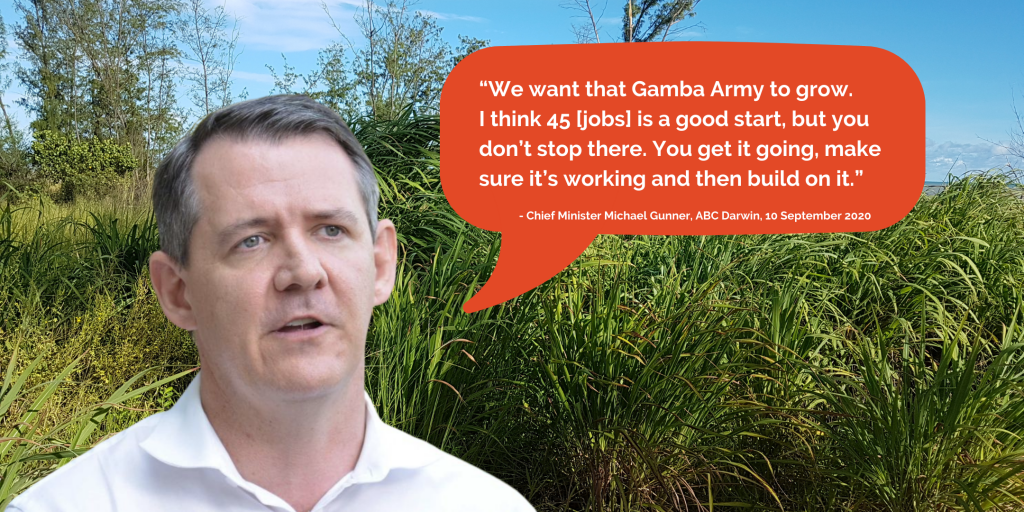 In 2020, the NT Government invested $500,000 in a Gamba Army to supercharge efforts to tackle dangerous Gamba infestations in the Top End.

The Gamba Army worked. It worked smart and hard to clear Gamba from land plots from Darwin to Litchfield and all points in between. More Territorians got to work and businesses benefited with more workers skilled up to do the job. Community groups joined with well-trained Gamba Army teams to clear even more Gamba. Locals embraced it and now want it to come back bigger for the next control season.

After a big Wet, Gamba has spread to more places. The Gamba fires have already started this fire season and worse may be yet to come. Territorians desperately need the Gamba Army to grow.

But in the NT Government’s 2021 Budget, so far, there’s no funding for the Gamba Army to continue – let alone get big enough to turn the tide. We can change that together. We won support for the Gamba Army with a big community push and we can do it again.

Now isn’t the time to back away from the Gamba Army. Write to your NT Government representatives today to call for the Gamba Army to grow, so we can tackle the Gamba crisis once and for all.

We’ll send your message to: